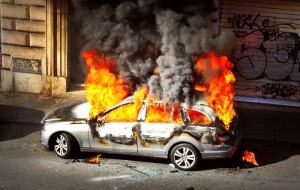 When we speak of ‘third party’ cover, an example is as follows: If you were to crash into another vehicle and the accident was deemed to be your fault, then despite not being able to claim for damage to your own car, you’d at least be covered for any damage or personal injury incurred by the other driver. You’d also be covered for legal costs in the event of such proceedings, excluding fines.

‘Fire and theft cover’ refers to any damage to your car sustained during an attempted theft, or any fire damage sustained.

The downside of Third party, fire and theft cover is that you will not be covered for any repair costs to your own car if the damage is your own fault. For example, if you accidently drive into another car, the costs incurred to the other party’s car will be covered, but the damages to your own car will not. This can prove to be very costly if you own an expensive car which is not paid off.

For this reason, Third party, fire and theft cover tends to work better for people who own lower-value cars. If your car is paid for with a loan, or if you definitely would not be able to afford to fix your car out of pocket, then it is probably a better idea to opt for comprehensive car insurance which would cover any expensive repairs.

There is also the issue of having to prove that a theft took place. For example, if your car is damaged by thieves who are attempting to steal it, the insurance company may want proof that the damage was in face caused by a thief. It may not be so easy to prove this, so in that case, one may end up having to pay out of pocket.

Overall, Third party, fire and theft cover is a reliable and relatively extensive form of car insurance cover. However, make sure that you do your research properly before deciding on an insurance plan which best suits your needs.

View all posts by: carinsuresa